Although it is difficult to predict the exact nature of air transport by 2050, it is widely acknowledged that aircraft will have evolved considerably, perhaps enabling trans-Atlantic travel in as little as 2 hours. Airborne drones will almost certainly be used for a range of services from delivery to observation to transport. Having an airport that is enabled to accommodate, and service increased aviation activity and its various modes could be central to the county’s economic success.

An expanded and enhanced airport would have a direct economic impact by creating employment on site. An airport able to accommodate long range aircraft would give Gloucestershire direct international connectivity, supporting increased tourism, globalisation of trade, and export of Gloucestershire’s growing range of products, from artisan foods to high-tech engineering and professional services. It would provide an important mechanism for the county’s businesses and expertise to foster international links in key areas such as cyber-security and advanced manufacturing.

As the Cotswolds is already an internationally recognised tourism brand, direct air access could result in an increase in international tourists. This would provide a direct injection into the local economy of ‘cash’ that has been earned elsewhere, and support services that benefit the local population, such as pubs, restaurants, and leisure activities. Supported by a strategic marketing campaign, this could impact all the county’s tourism assets including the Forest of Dean and Severn Vale 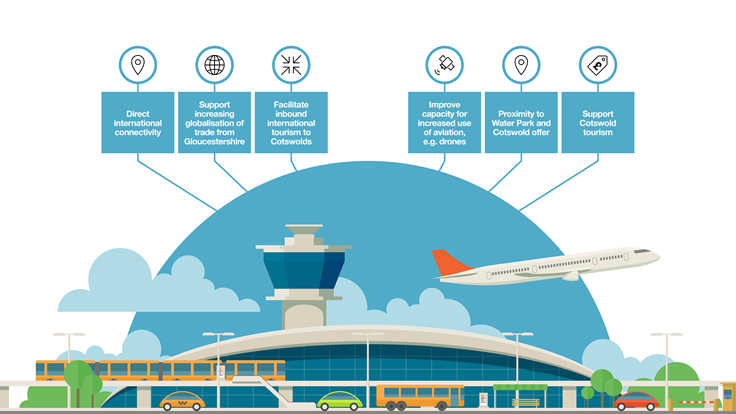